Summary: Great features on and the cons are just minor. The goal of a stand is height, silence, strength and comfort, in that order – this stand does exactly that without needing to be replaced every few years.

​This is a Big Game Wide Maxim Treestand review by Tim O’Neill:

I place this specific stand in the woods behind my home, and hunt or pre-scout in it for hours during our four month deer season. From it I have dropped six deer in two years.

The foot platform is 17’ off the ground, the width of the seating area is 28” with the depth of 35”. This is a great stand at a great price with room for lots of gear or movement. These will typically be right around $150, which is a solid price for a complete stand. While it is a straightforward device, let me get into some specifics.

It is made of steel and weighs about seventy pounds, so you will likely need a hand moving it around. Like all ladder stands you will need two or three people to help you set it up to a tree. The seat portion should be installed before bringing it into the woods. That includes the shooting and foot rests. I assemble that and then attach it to the first of three ladder portions before loading it up. 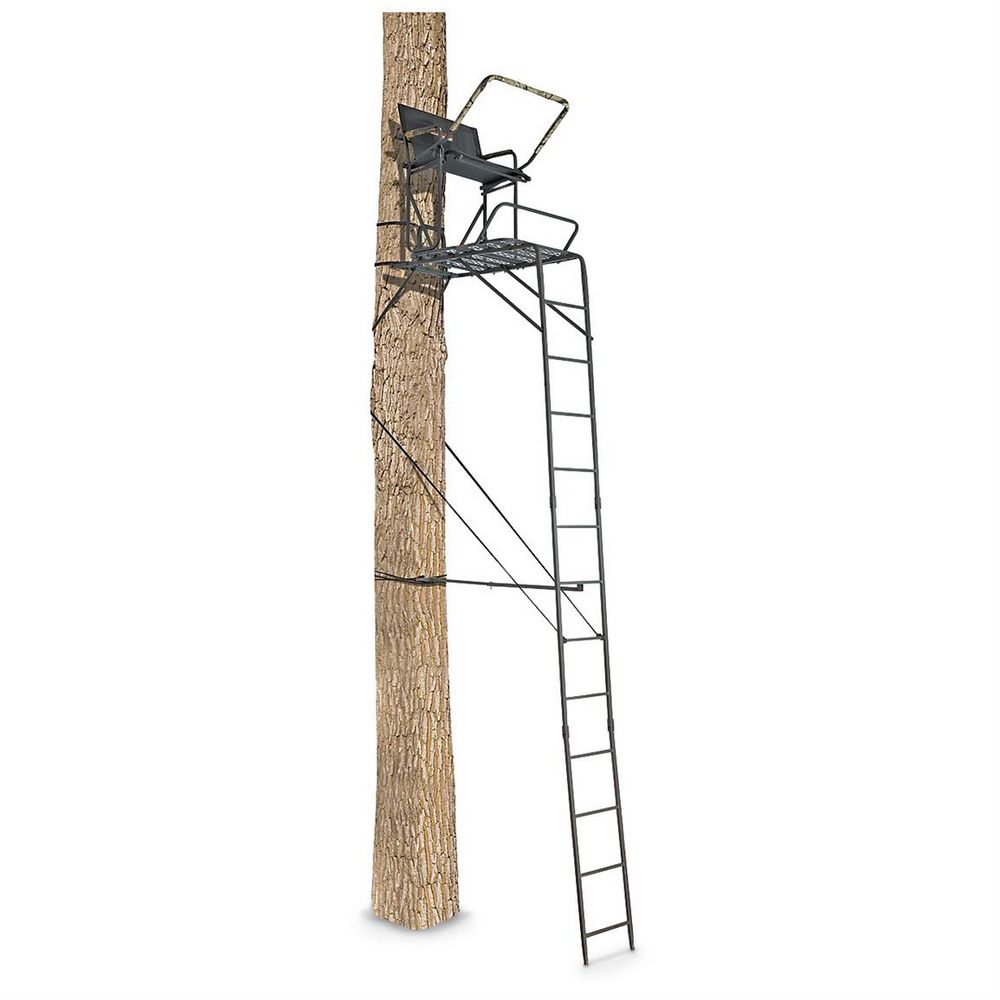 The instructions included with this stand are pretty clear, but the images are hard to make-out clearly, so expect a bit of fumbling around if this is your first ladder stand. All the bolts, nuts and pins are included but make sure none fell out into the box during transportation.

I was able to get this into a steep slope and mount it with just one friend. We have both done this quite a bit though, so you may want three people. I’ll admit we always wish we had more to help out.

Once you select your spot, assemble to whole stand so that the seat portion faces the ground (if you were sitting in it, you’d be looking at dirt). Once the ladders are attached and pinned, set the bottom about 38” from the tree base. Use a rope to lift the stand backwards towards the tree you have picked. One person pulls the rope and the others guide the stand up and back while steadying it with the bottom ladder portion. Go slow here, if it falls you will likely cause damage and safety issues.

Once the cleat makes contact with the tree it will need to be leveled before cinching it down and securing the remaining ropes. I suggest doing this from behind with a separate ladder for safety reasons. You do not want to be leveling the stand while on top of its unsecured platform (though people do it). From there it’s a matter of a few cinch straps and you are good to go. Personally, I switch out any straps for actual tie-down ratchets you would use on your pickup. I just have more confidence in metal gearing than plastic cinches, and I leave my stands up awhile.

These are best suited for regularly hunted areas that are accessible by some kind of vehicle. This is due to their size – you won’t be hiking this very far unless you are really motivated. I would suggest a tree with considerable camouflage behind it, such as other trees with thick branches, evergreens being the best. I zip-tie a camo cloth around the side and back of the frame to further conceal my movement.

I also think it is important to get these in several weeks ahead of season to acclimate any deer or other game. Mine has been up for two years and I have all kinds of visitors, including deer, walk right underneath me munching acorns. This specific stand is very tightly placed in a small ravine with a creek bottom. The deer rarely come out of the lower thicket, but when they do, they are right under me. The platform is grated steel that is quiet and see-through should something sneak right underneath you (see right).

There is ample room up here for a rifle or crossbow, I have used both effectively. A traditional or compound bow is tight when shooting to the sides because of the shooting and arm rests. It can be done, but I will say that there are stands specifically designed for bow hunters that would give a better shot. That is very important in the early season when there is already enough brush and leaves blocking shot angles. The shooting rest is technically designed to lift up and over you when getting seated. It would be tempting to do this for a bow shot but don’t as it’s dangerous and Big Game explicitly says not to. Instead it works for me to move forward on the platform and put my hip against the shooting rest with my bow on the other side. Practice before season opens though. I take a shooting block into the woods to do this from several angles and it really boosts confidence levels.

I would buy this again or recommend it to new and experienced stand hunters. I like all of the features on it, and the cons are just little things. The goal of a stand is height, silence, strength and comfort, in that order – this stand does exactly that without needing to be replaced every few years.